18350: A type of battery. Small in size and capacity, and used in certain mechanical mods.

18650: A type of battery. These are the most commonly found variants and are used for many mechanical mods and APVs.

Adapter: Allows a different type of atomizer or cartomizer to fit differing styles of battery connections.

Atomizer: This is the heating element in an electronic cigarette. Typically atomizers need to be replaced every few weeks, as they are a consumable product.

Battery: A device that powers the electronic cigarette. They come in many forms.

Box Mod: A certain style of e-cigarette device which is shaped like a box.

Cartomizer: A device containing an atomizer, and filler material to hold an amount of e-liquid. Refillable.

Clearomizer: A tank in which you put your e-liquid. Clearomizers have a built-in atomizer, which can be replaced.

Clone: A type of device that is designed to replicate as closely as possible a highly-sought after genuine product. Clones are often cheaper, but of much lower quality and do not go through the same manufacturing standards as the genuine article. Some can even be highly unsafe.

Charger: A device used to charge a battery. Always use the correct charger, such as the one provided with a rechargable product, or an authorised replacement.

Coil: Wrapped wire, typically kanthal, attached to an atomiser that heats up upon operation of the device. Wicks in or around the coil heat up, vaporising the juice they are saturated with.

Cut-off: A safety feature which shuts down the device after a set period of time.

Drip Tip: A drip tip is the mouthpiece. They can come in various shapes, sizes and colours.

Dry Burn: A method used to clean the coils in an atomizer by activating the device without a tank of liquid attached.

Dry Hit: An unpleasant taste when using an e-cigarette, triggered by not enough e-liquid being saturated in the wicks when you activate the device.

Dripper: A type of atomizer which is customizable, allowing the user to drip e-liquid onto their wicks.

E-Liquid: The liquid solution that is vaporised by an e-cigarette. It contains flavourings, nicotine, and a mix of PG/VG.

Ego: An e-cigarette which uses a long cylindrical battery and a clearomizer. The majority of starter devices are ego style.

Flooding: This can occur when too much E-Liquid is added to the clearomizer/atomizer. It often results in a ‘gurgley’ vape.

Genesis: A rebuildable atomizer which is a combination of a tank and a RDA.

High Resistance: An atomizer can have a high resistance meaning that it is capable of being used with high voltage devices.

Hybrid: A hybrid is a device which had an in-built tank/atomizer. The valkyrie is a good example.

IMR Battery: The more traditional style batteries. lithium manganese oxide cylindrical cell. They provide a large amount of current but are not protected. These batteries would be used with E-cigarette mods. Juice: E-Liquid

Kanthal: A type of wire used to make coils in atomizers.

Leaking: This can happen when too much e-liquid is flowing to the wicks, and the wicking material cannot absorb it all. The excess liquid will leak from holes designed for airflow.

Low resistance: A lower resistance on your atomizer/clearomizer means that there is less regulation of current and so the heating element will got hotter more quickly and produce a lot of vapour.

mAh: Milli-ampere hour. The higher the rating the longer the battery will last.

Mechanical Mod: A mod which uses IMR batteries to power it. They are unregulated and have no safety features. They are advanced electronic cigarettes and should be used only by experienced users.

Mg: The unit of measurement for nicotine strengths

ML: A unit of measurement for Liquid

Ohm: The electrical resistance measurement which is used to measure the resistance in atomizers

Passthrough: A type of connection that allows the user to safely use the device whilst it is charging. Mainly applicable to devices that charge through micro-USB.

Premium Juice: There is a wider array of flavours available, with many months of time spent procuring the best ingredients for flavour

PG: Propylene Glycol. A mixing agent which is usually one of the main ingredients in e-liquid.

Propylene Glycol: A mixing agent which is usually one of the main ingredients in e-liquid.

Protected Battery: A battery which has an in built safety feature which shuts the battery down in    case of a short circuit. These are slightly longer than the unprotected batteries and so may not fit in your electronic cigarette device

Rebuildable Atomizer: An atomizer which can be rebuilt by the user. Using coil and wick the user can manage the amount of flavour and vapour produced

RDA: A typical RDA will have a metal wire (coil), which heats up e-liquid that has been poured onto cotton. The user creates the coil, inserts the cotton and drips e-liquid onto the cotton. Once the device is powered up vapor is produced. As the taste begins to dissipate, its time to drip some juice back onto the cotton.

Resistance: Measured in Ohms and relating to the coils. The lower the resistance, the lower the voltage needed to heat the coil.

Short Circuit: An unintended electrical connection. It can cause the device to fail. Many e-cigarettes have safety features to protect users from dangerous outcomes of short circuits.

Steeping: Steeping is the process in which an E-Liquid is left to ‘age’ to get the best flavour. Similar to wine. For some E-Liquids steeping is necessary and would typically need to be steeped for 1-2 weeks at least.

Sub-Ohm Vaping: Sub-Ohming refers to vaping on a device with a resistance level of less than 1.0 Ohms. All beginner style coils operate at more than 1.0 ohms. However, some coils are capable of going below this point, those that do are called ‘sub-ohm’.

Sub-Ohm Tank: A tank which is capable of using low-resistance coils which in turn require more battery power to be used. A step up from beginner tanks which offers more falvour and vapour.

Throat Hit: The feeling that smoking a traditional cigarette gives. A slightly harsh feeling in the throat which smokers become accustomed too. A good throat hit in an E-Liquid mimics this. Rather than feeling as if you’re inhaling nothing, you feel a little kick.

Vape: Your E-Cigarette. Or to use your e-cigarette. As in: “to vape”.

Vaping: The act of using your e-cigarette. As in “I am vaping”

Variable Voltage: An electronic cigarette device which allows the user to change the voltage setting which can improve flavour and vapour production.

Variable Wattage: The ability to change the wattage in an electronic cigarette for best performance

Vegetable Glycerin: Another of the main ingredients in e-liquids. It is a mixing agent which consists of natural ingredients.

Wick:  Any material used to adsorb e-liquid and deliver it to the coil for vaporising. 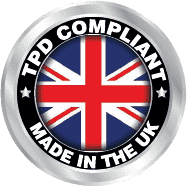